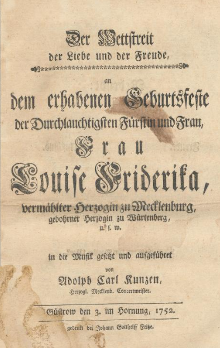 We have received the following from Miriam Roner (RISM Germany, Dresden office):

For RISM Germany, this major birthday is a welcome opportunity to put a special emphasis on cataloging her music collection.

If she were alive, she surely would have been feted with music, such as with the serenata “Auf, mächtige Jahre, reißt ein” (D-ROu Mus. Saec. VIII-46.10) that Adolph Carl Kunzen composed for her 32nd birthday, or the cantata Auf, lasst den Sterblichen der Erden die Tugend ewig heilig werden (D-SWl Mus.2702; RISM ID no. 240002452) by Johann Wilhelm Hertel, which was heard one year later.

It was probably Luise Friederike herself who started the longstanding tradition of birthday music in Schwerin, when she commissioned the serenata Auf, freut Euch des Glücks (D-ROu Mus. Saec. VIII-72.1) from Johann Baptist Georg Neruda in Dresden for her father-in-law Duke Christian Ludwig II’s special day in 1749.

Luise Friederike’s music collection, which has been preserved at the Universitätsbibliothek Rostock since 1799, contains occasional pieces such as these in addition to works that document her own musical habits. Even as a young woman, the Württembergian princess received lessons in voice, keyboard, and lute.

Almost 30% of the surviving music comes from the time up through the end of Luise Friederike’s 20th year, which she spent at the Ludwigsburg court and—after the early death of her father—at the dower house of her mother in Göppingen. This includes a comprehensive collection of lute tablatures and a numbered collection (with very few gaps) of 50 Italian-language arias, cantatas, and duets, the most prominent composers here being Johann Adolf Hasse and Andrea Bernasconi.

Her later acquisitions also show this love of Italian opera. In particular, she assembled the ballet music, scores, and parts to the opera productions of Carl Heinrich Graun, which she became familiar with during several stays in Berlin in the 1740s, before her marriage to Crown Prince Friedrich of Mecklenburg-Schwerin.

As the Crown Princess and later Duchess of Mecklenburg-Schwerin, she used her visits to the cultural metropolis of Hamburg (which sometimes lasted several months) to add to her collection. There is evidence of close contact to Jacob Schuback and an interest in the works of the opera singer and composer Filippo Finazzi, who was active in Hamburg.

In addition to voice, Luise Friederike was also evidently devoted to the piano and lute. A “Clavierbuch,” which had been in use since her Württemberg days where her teacher Charles Corraro Belleroche, among others, had filled it, continued to enjoy additions into the 1760s, including from Nichelmann, Jommelli, and A. C. Kunzen (D-ROu Mus. Saec. XVIII-63.7). She had transcriptions done of C. H. Graun’s opera compositions for piano, and Johann Friedrich Daube transcribed some music for the lute as well. 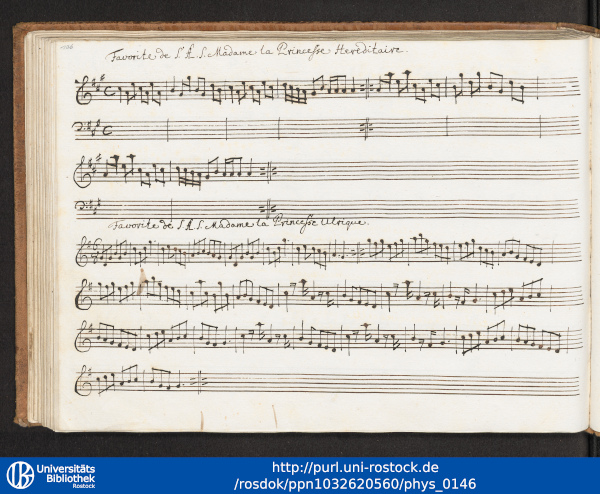 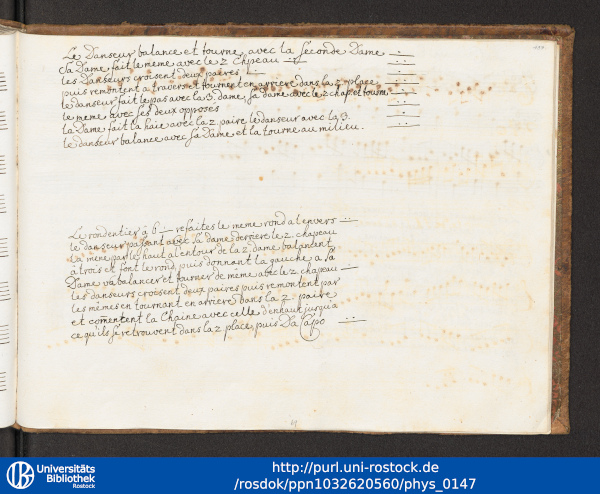 Browse the news archive by category below or use the search box above.

All news posts are by RISM Editorial Center staff unless otherwise noted. Reuse of RISM’s own texts is permitted under a Creative Commons Attribution-NonCommercial-ShareAlike 4.0 International License. In all other cases, please contact the individual author.